Notes from My Nicaraguan Trip

It's 7:15am Saturday(8/6/2011). After a 3 hour plane ride and a 3 hour layover, everyone is sill in pretty good spirits. We'll see how everyone does this afternoon. The Houston airport is weirdly busy at 6am.

It's 9:23a on Sunday, we're having breakfast and waiting to go volcano surfing. We're in "the house," also known as Casa Blanca. Most of the houses that I have seen in Nicaragua have been very open air, which makes sense when you consider the climate. It was hot a humid when we arrived in Managua. I was humid to the point that I was an open questions if you were sweating or it was condensation. 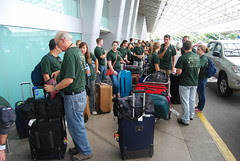 Once in Managua, we took a 3 hour ride on a school bus to the beach near Chinandega. We had mass at the local church, and when we arrived, the parishioners applauded, which was a surprise. The people were very beatific. There were 2 young girls who did the readings who were adorable. They were practicing for their confirmation. And Father Raphael was very welcoming. 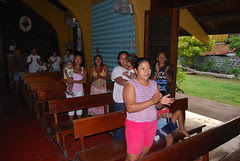 We had dinner at a seafood restaurant, and we got to sample the local beers, Toña and Victoria. We got to the house around 11, and open air affair. Lightening struck the building, and the water was out. Something else happened early in the morning, when the power went out. The was a crash and a flash, but nothing seems to catch fire, and we survived. 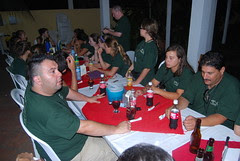 And woke up around 7am. Now it's off to the volcano.

9:57p Sunday after the volcano. The volcano was an awesome experience. Walking to the top of the hill was hell, and there were many times I wanted to quit. But Sue Foltz kept me going and Bernie Terrien helped as well. Going down was great! It was like sand skiing! The weather was great, not too sunny and a decent breeze. I got my picture taken with Emma. She was happy to beat me up the hill, which was ok with me.. It was a long bus ride home. 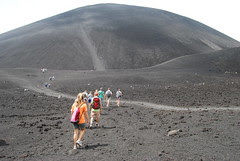 8:52p Monday today was a 2 Part day. The first part of the day was a trip to the city dump. We walked thru what the amigos people call the triangle of death. It starts with the cemetery, and the just beyond, the city dump. This is significant, because, after hurricane Mitch in 1998, more than 300 families were forced to live the since their homes were destroyed. The Amigos organization was started by helping these people. Upwards of 150 families now have homes because of this project. The tour finishes bus visiting El Limonal, the community that lives by the dump.

Out of respect for the families, we were not allowed to take pictures.

It was very moving. There are still up to 150 families living there making a living by picking what they find from the dump.

The second part of the day was working in the village of El Chonco, which is one of the communities Amigos for Christ rebuilt after hurricane Mitch. It is a beautiful community in the shadow of the San Cristobal volcano. 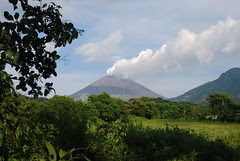 It is important to understand that when El Chonco is called a "village" it is really an overstatement. It is a group of dwellings near a highway. The highest quality of the dwellings are made with cinderblock and corrugated steel. The lowest quality dwellings were made from branches, palm fronds, cardboard and old rice bags.

The children met us at the bus and wanted to play. I played with Juanita who I called Princess. She was extremely high energy and I got a hug from her. The rest of the day we worked on shower/toilet lines for the houses, digging a 2 foot deep trench thru the yard to the location of the bathroom and the house spigot. 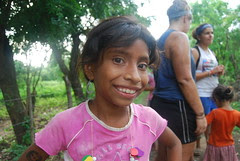 9:32p Tuesday.  It was supposed to be a full day at El Chonco. Today we were mixing cement for covers to septic tanks, and digging out the septic tanks themselves. The day was hot, at least 100 degrees, but we ended making progress on two tanks. I got to play with the kids again.
We went to via Catalina, which is the community that was built for/with the people of El Limonal, near the dump. It has a school, feeding center, library and a soccer field. We were there to attend a play at the school. It rained , and the power went out, but it was great to see the community. the play went on, illuminated with headlights of a truck. 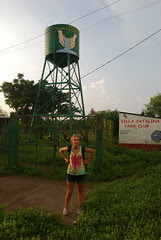 Wednesday: this is a day I will never forget. In most lives, you rarely have intense emotional experiences. As you get older, you are lucky to have one of them a year.

I had two today.

This morning we went to an orphanage to visit a group of developmentally disabled kids and adults in Chinandega. Most days, the kids get some playtime by themselves, but are otherwise lift to themselves. So, having visitors is a big deal. I met a girl whose nickname was pronounced Cheelo. It was hard to tell how old she was, but she was about the size of a 10 year old. It was clear that she could not walk. I sat down with her and put my arm around her. As soon as I did, she grabbed my other arm gently, and kissed it. It was a small gesture, but I was overcome with emotion. I often go weeks without a human touch, and here was a child, willing to accept me for just sitting with her.

We played a simple game for a few minutes, and I got her to laugh. She had a cute belly laugh. It reminded me of Emma's laugh when she was a baby, because it shook her whole body. The tenderness of our time together, and sheer joy from Cheelo overwhelmed me. I had to work hard to fight back the tears. Emma out her hand on my shoulder to comfort me. The fact she would do that made the moment all the more special.

In the late afternoon, we got a chance to participate in the first operation of pumping water to the water tower in the village of El Chonco. We were extremely lucky to be therein that week. It is important to know that the group that runs these programs, Amigos, has been working on a water project for the better part of 3 years.they have been drilling wells, digging trenches for water pipes, exclusively by hand. They are doing this because the village El Chonco has no clean water source. The most common form of illness is diarrhea from bad water; most of the children have near permanent parasitic infections.

We big event of the week was the turning on of the well pump that fed a 2 mile section of pipe to the water tank for the village. We got to be theret  when it was turned on in front of the whole community. It was a moving moment. Maria, the leader of El Chonco , said she had been praying of this moment for 9 years. The the community joined in washing themselves in the water and doing so with joy. everyone joined in. The men from the village who laid the pipe were there; the staff members of Amigos were there and we were there to see it happen.

It is important to know that most of the houses in El Chonco have nothing. No power, no electricity, no appliances, and no water. Now the will no longer h ave to walk 2 miles  just to get even the smaller drop of water. Soon, they will be able to turn a tap to get water. Soon, this community will be able to take showers in their own homes. It was a great day for these beatific people. I had to once again hold back the tears at this thought.

This video is the best thing I have seen to convey the emotion of the day.

Thursday 6:14p today I  was on medical duty. We went to Miguel Cristiano, near the Honduran border. We got stopped by Nicaraguan army on the way which was a little tense for a while. But ultimately we got to the community . It was In The mountains, and we were in sight of Honduras. We had many folks with stomach issues and 2 kids with fevers. It started raining, and we had to leave so we could get across the river. There was a river between us and the town and the only way to get across it was to gun the engine and go thru the river.

Emma had a great day as well, and had fun mixing cement for building septic tank covers. They finished 5 in one day, which is impressive.

Friday: Today was supposed to be a light day. Emma and I went on animal delivery today. Amigos has a program where they sell pregnant pigs and cows to farmers in Nicaragua. Then, a year or so later the farmer has to give a pregnant offspring of the first animal back to the program back. In thi. HERE.

We finished the day by going to the beach a Corinto, which is about 20 km from Chinandega. We had Mass on the beach at sunset which was beautiful.

The quote of the day from Rachel (no last name to protect her,mostly, from embarrassment: "I can't wait to get home and get some real American food, like a burrito."

Saturday 2:30p. I am on the flight from Managua to Houston. On the one hand, I have a small case of diarrhea and a case of heat rash. I am also tired of sweating 24 hours a day. On the other hand, I will miss the place. First and foremost, the people, both from the trip as well as the people in the villages of El Chonco and Miguel Cristiano. The group we were with are a fun bunch and made everyone feel welcome. We have all had an intense bonding experience.

The people of Nicaragua were the real surprise. They were more than welcoming. And very friendly. Give the US's previous political involvement in Nicaragua during the Contra War, I would have suspected more suspicion from them. I detected none. They were helpful when I asked directions, or asked them about their villages or towns. They are truly a beatific people.

Things to do for next year: (yes, I hope to go back)
0.    Improve my Spanish. learn more medical words.
1.    Get additional red cross certifications so I can be more useful on the medical team.
2.    Bring a gps. Some of the villages we go to are not on the map. I would love to know where they are.
3.    Bring American snacks for the staff.
4.    Get in shape for Cerro Negro.
5.    Hike San Cristobal Volcano.
6.    Write a new section on Chinandega for Lonely Planet

While there were many emotional responses I had this week, my one intellectual response was this: Nicaragua has a huge amount of potential, and much of it is being lost due to poverty. With a small investment in a few areas, Nicaragua could develop more fully as a country. These areas include:

7.    Agricultural development to improve yields
8.    More paved roads. Only 12% of roads are paved,
9.    More water projects like the one at El Chonco.
10. Better trash management. This will decrease the amount of trash burning.
11. More appliances for cooking, this would eliminate cooking fires, and reduced deforestation

Numbers 4 &5 are important, because the air quality is so poor among rural communities that emphysema is one of the leading illnesses.
Posted by Bill Roth at 9:34 PM 2 comments: