Here is this year's Nicaragua travel log. You can find a map of all the places I went to, here.

The plane ride out was uneventful. Like last year we took a redeye to Houston. The best part the trip for me was having breakfast with Emma, Claire, Beth, Maddy and Shawna at a diner in Houston airport. We were all tired it was fun for me to sit at the counter with my daughter and my youngest cousin(Claire), and their friends.

When we arrived, we took at 2 hour bus ride to Poneloya, on the pacific coast, for Mass at the local church, and dinner at Veronica and Ramon's, two people from parish who are from Nicaragua. After Dinner, there was a performance by a local troupe, which involved a large woman built out of stilts, a man in costume, and lots of drumming. You had to be there. It was done in rapid fire rhyming Spanish, so it was lost on me. 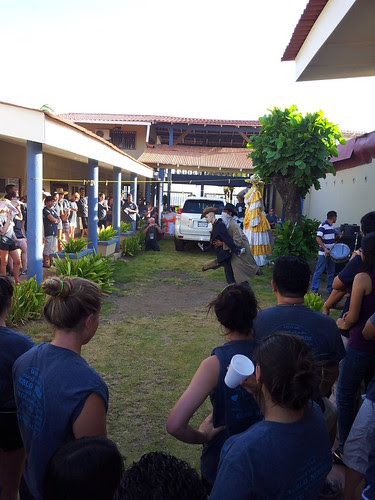 We then finished dinner at 8pm on Saturday.and we took a 1.5 hour busride to Chinandega, where the organization called Amigos for Christ is located. We styed in the men's dorm which is a collection of bunk beds.

Sunday started with Mass at Nuestra Senora de Pilar, the church across the back wall from the Amigos in Chinandega. It was all in Spanish, except for the Homily, which Fr. Joe luckily did in English. 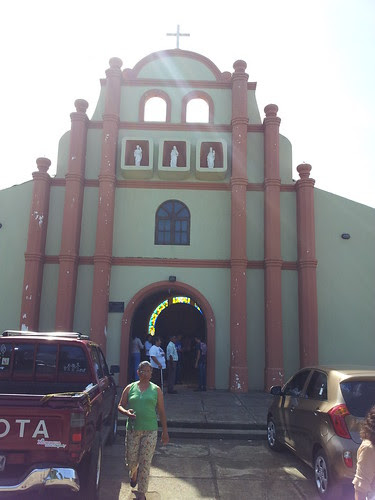 After a quick breakfast, we got on the bus to Cerro Negro. After a 2 hour bus ride, we arrived at a big black volcanic mountain. This year, Emma and Claire took the hard way up, and after last years experience, I decided to take the easier hike up the back side of the mountain. This was a great choice for me, since this year, I was able to get in an hour-long energetic hike, and spend the rest of the day on top of a volcano. Claire did a great job, and Emma was her usual speedy self. I was able to get a picture of me with Emma and Claire, which I will treasure always. It is Amigos to make sure that everyone makes it up the hill, and a few folks took about 4 hours to get up the face of the mountain. it takes hours to get up the mountain, and minutes to get down. I wiped out twice, and I loved it. We made it back for Dinner and Devo(Devotional: A spiritual time each day), and then collected over 185 medical items from my community for use at the maternity hospital in Chinandega.  I am so proud of my community for helping with this effort.

After a relatively sleepless night,our first activity was listening John Bland, the ED of Amigos For Christ, talk about the nearly 80 staff members. They include folks who work in the construction, medical, and marketing groups, as well as the office staff and missionary teams.

I am on the medical team his year, and our first job was to make 80 post-op gift bags for women who were getting surgery at the Chinandega maternal clinic. The essentially involved loading boxes on a truck, driving 10-15 minutes (ignore previous comment about 1 hour minimum), and unloading boxes. We first went to a MINSA distribution center to drop off some supplies. The MINSA office had the flavor of government offices anywhere; lots of rules, and board employees. After that we headed to the maternity hospital to deliver supplies.

If you live in a More Developed Country(MDC), you have certain expectations of what a hospital is: Modern Building, the latest scientific equipment, and clean sterile rooms. In Nicaragua, which is a Least Developed Country (LDC), you have none of these. The buildings we were in were old, ramshackle affairs. For example, the Maternity Hospital was in an old warehouse building. The floor tiles were broken, the paint was peeling. In addition like most Nica buildings it had an open air courtyard, which in and of itself is not a problem. What is a problem were the many pools of standing water. The conditions were appalling. 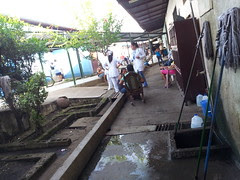 To be clear, this is not a condemnation of Nicaragua, nor the Government. This is par for the course in the poorest country in the continental Americas. The cause is poverty and lack of economic opportunities. They are doing the best they can with what they have, and more needs to be done.

Tuesday was a dig day. We went to Rincon Garcia, a remote village 30 km from the Honduran border. This is a poor community who until recently had no access to clean water. But the Amigos organization started a new project in February, and had a working water system up by July. This is part of Amigos Modern Bathroom project. During the morning, we worked on digging septic tanks, and we were fortunate to work on the of an extended Nica family, which include Augustina (the Grandmother), Miguel Santana (Father) and Franklin, the Son. Franklin is 6 and very welcoming.

Before we arrived in the community, we were told about the organizing process with Rincon Garcia. It was mentioned that this community was less welcoming that last years community, El Chonco. Nothing could have been further from the truth. When we arrived we were warmly greeted. We went to work digging septic tanks. To build a septic tank you have to build a 15 foot hole with roughly a 6 foot diameter. This areas is highly volcanic, so the soil is hard. We got lucky, as it rained last night, so the soil was heavier, but east to work with. 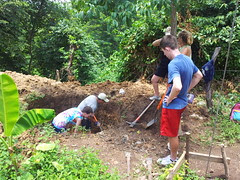 After we were done with digging, we broke for lunch. After Lunch, Amigos held a kind of carnival for the kids, which include face painting, a piñata, and a beauty contest of sorts. With regard to the last one, I'll let  Emma write about it. We then hung around the village until 5pm and came home.

After dinner we break into small groups to discuss the day. Sue Foltz led the discussion. Some women were angry about the beauty pageant, saying it was demeaning and objectifying to women. Note they were not told ahead of time this would happen. Most of the girls who participated felt uncomfortable at first, but then played along in the spirit of the game. A woman in our group, Johanna, was originally from Columbia. Her opinion was the most interesting: While she felt uncomfortable at first, her opinion was "it was only a game." All in all, it was an interesting opportunity to discuss cultural and gender issues.

The day started out with a trip into town, Chinandega. We started with a trip to the orphanage. This was moving experience for me last year, because of my reaction to one girl, Chilo. However, she apparently had surgery for Kidney Stones. I hope she gets better. In the afternoon we walked around Chinandega, and then got a chance to to go back to the community we helped last year, El Chonco. Four of us went out to the village to participate in a training session for the community health workers in El Chonco. These workers (all women) were  picked to provide the first line of defense for health related issues. It was an amazin8g thing to see. It raining hard, but the ladies and some of their children walked thru it to make it to this class.

The class was on hygiene and how to avoid parasitic infections. It is hard to imagine, but here we were, in house not much more than a cinderblock hut, and a class was being given in PowerPoint from a laptop, using a projector found in any high tech office in the US, projected on a screen tied from a roof support beam. And it worked. It was a multi media presentation with include slides, and a Columbian-produced health video about the death of a small boy named Antonio, who does from an easily curable infection. The class mentioned the importance the basics. Hand washing, keeping your food area clean, and keeping the house clean.

The class was held at one of the Community Health Workers' houses. It was also the home of an amazing little girl named "Esmara". 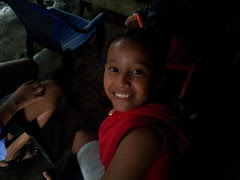 At 9 years old, should could already speak some words of English and said she read books. When I ask her how many books she had, she said "Uno", one. So amidst an amazing experience, reality creeps in. I need to organize some kind of book drive to make sure Esmara can get all the books she can read.

Thursday was a quiet day. We make up packets of equipment for the remote clinics. They included biohazard and sharps buckets, as well as medicines, sterile sheets, vitamins and salves. In the afternoon, we went back to play with the children in the Materal Hospital. Often when a child is in the hospital, the mother comes as well, often walking 20 miles with her other children to get there. While in the hospital the other children have nothing to do but roam the halls. So we brought some coloring books and crayons an played with the kids for 2 hours. I spent time with a bright two-year-old, named Marcello, who had an IV catheter in, and seemed to have a fever. I also played with a bright 8 year old girl named Delmis. I hope we can provide her a better future for her.

Today, everyone else went to El Chonco, Via Santa Catalina, and the beach at Corinto. The head of the medical service, Dr. Christian Fuentes asked me to help him with visits to the community. We first went to Via Esperanza in the Villa Nueva Municipality. Here the Dr. gave a class on how to avoid parasitic infections. He used the same projector and laptop as in El Chonco. I was able to back into a power line to get him an outlet for the projector: 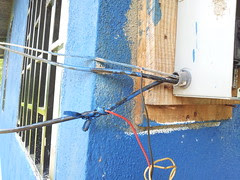 Thanks to my brother David for the MultiTool last Christmas.

While the Doctor was teaching, I played with the kids of the village. Here are some pictures and videos of the kids. There was a little girl, named Tatiana, who was fierce, and took no guff from any of the boys. We played soccer, Hide and seek, and other things until the class was over. As we were leaving, some of the villagers noticed we had a flat tire. So we pulled out the jack and it took 30 minutes to get the jack to work. Luckily we did have a spare tire. For a while, I was seriously worried about how we'd get back to Chinandega and my flight the next day. But we were able to use some wood and some seriously weird jack placement to fix the flat.

Next we went to the hospital in Villa Nueva to pick up some epidemiological data. It turns out that thru the government and Amigos, they have cut the incidence of Diarrhea in half(!) in the last year in some areas in the Chinandega Department. We also stopped by Rotario, which is another community Amigos works in. Our job there was to invite the community health workers to a meeting on August 26 to do more training on eliminating parasitic infections. We walked around the neighborhood inviting the community healthcare workers to the meeting.

From there we went home, for the last night in Nicaragua. I was happy to see Esmara once again. One of the staff members invited several children to sleep over. They were all great kids.

Our flight leaves at 12 and we'll leave Chinandega by 7am so we have time to get to the airport with a reasonable amount of time built in for the usual Nica issues.